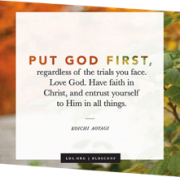 It’s not every day that our local church leaders are asked to read letters or statements from our general church authorities. Today marks the first time I’ve ever seen a letter from the Council of the First Presidency and Quorum of the 12 Apostles – given in a special meeting all on its own. This wasn’t a “read it over the pulpit during Sacrament Meeting” kind of letter. It was written in response to the Supreme Court decision elgalizing same-sex marriage in the United States, and it was read by our bishopric during a combined third-hour meeting, so we could ask questions, give comments, receive further council, and share testimony of eternal principles.
You can find the cover-letter, the letter itself, and the great background information they included, at this link.
–And I included a copy of the letter below, just to make it that much easier. 😉
I am deeply grateful to have been there to feel the love the Lord has for all of His children, and to feel such an outpouring of peace today.
So, dear sisters, if you were part of the small army taking care of the many children in our ward so that their parents could be in attendance, THANK YOU. Thank you for making that possible. And if you for whatever reason couldn’t make it today, I wanted to make sure you were in the loop.
The principle of marriage is an important part of God’s plan for His children. It really is. We need to be firm in our testimony of that Divine Plan, and firm in our understanding of this particular issue so that we can joyfully & clearly teach it – most especially to those who have never heard it, and to our children.

Because of the recent decision of the United States Supreme Court and similar legal proceedings and legislative actions in a number of countries that have given civil recognition to same‐sex marriage relationships, the Council of the First Presidency and the Quorum of the Twelve Apostles of The Church of Jesus Christ of Latter‐day Saints restates and reaffirms the doctrinal foundation of Church teachings on morality, marriage, and the family. As we do, we encourage all to consider these teachings in the context of the Plan of Salvation and our Heavenly Father’s purposes in creating the earth and providing for our mortal birth and experience here as His children.
Marriage between a man and a woman was instituted by God and is central to His plan for His children and for the well‐being of society. “God created man in his own image, in the image of God created he him; male and female created he them. And God blessed them, and God said unto them, Be fruitful, and multiply, and replenish the earth” (Genesis 1:27‐28). “Therefore shall a man leave his father and his mother, and shall cleave unto his wife: and they shall be one flesh” (Genesis 2:24). Strong families, guided by a loving mother and father, serve as the fundamental institution for nurturing children, instilling faith, and transmitting to future generations the moral strengths and values that are important to civilization and vital to eternal salvation.
A family built on marriage of a man and a woman is the best setting for God’s plan of happiness to thrive. That is why communities and nations generally have encouraged and protected marriage between a man and a woman, and the family that results from their union, as privileged institutions. Sexual relations outside of such a marriage are contrary to the laws of God pertaining to morality.
Changes in the civil law do not, indeed cannot, change the moral law that God has established. God expects us to uphold and keep His commandments regardless of divergent opinions or trends in society. His law of chastity is clear: sexual relations are proper only between a man and a woman who are legally and lawfully wedded as husband and wife. We invite all to review and understand the doctrine contained in “The Family: A Proclamation to the World.”
Consistent with our fundamental beliefs, Church officers will not employ their ecclesiastical authority to perform marriages between two people of the same sex, and the Church does not permit its meetinghouses or other properties to be used for ceremonies, receptions, or other activities associated with same‐sex marriages. Nevertheless, all visitors are welcome to our chapels and premises so long as they respect our standards of conduct while there.
The gospel of Jesus Christ teaches us to love and treat all people with kindness and civility—even when we disagree. We affirm that those who avail themselves of laws or court rulings authorizing same‐sex marriage should not be treated disrespectfully. Indeed, the Church has advocated for rights of same‐sex couples in matters of hospitalization and medical care, fair housing and employment, and probate, so long as these do not infringe on the integrity of the traditional family or the constitutional rights of churches.
The Church insists on its leaders’ and members’ right to express and advocate religious convictions on marriage, family, and morality free from retaliation or retribution. The Church is also entitled to maintain its standards of moral conduct and good standing for members.
As members of the Church, we are responsible to teach the gospel of Jesus Christ and to illuminate the great blessings that flow from heeding God’s commandments as well as the inevitable consequences of ignoring them. We invite all to pray that people everywhere will have their hearts softened to the truths God established in the beginning, and that wisdom will be granted to those who are called upon to decide issues critical to society’s future.
THE COUNCIL OF
THE FIRST PRESIDENCY AND
QUORUM OF THE TWELVE APOSTLES
OF THE CHURCH OF JESUS CHRIST OF LATTER‐DAY SAINTS
Source: L7 Relief Society